In May 2017 We Bop participated in London Sangerstevne . Below, Catherine (Sop 2) reflects on the event, which included her first performance with us!

I joined We Bop in January 2017, and although they had performed at a previous London Sangerstevne this was my first time at the event, and my first ever concert with the choir! So, last Saturday it was with nerves and excitement that I caught the train from Brighton to London and headed to the prestigious Cadogan Hall in Sloane Square.

A ‘Sangerstevne’ means ‘Congress of Singers’. It originated in Norway and, in the spirit of Scandinavian egalitarianism, this festival of singing is a non-competitive event which provides an opportunity for choirs to meet and enjoy each other’s music. The idea was brought to London in 2004 by Philip Norman, the Founding Artistic Director. This year the festival took place over three days and included choirs from all over the UK, Europe and the United States.

Cadogan Hall, I began to realise, was a rather grand setting in which to make my We Bop debut! It has an audience capacity of 950, features a large, beautifully lit stage and a seated gallery. Our concert was the third of the day and consisted of performances from seven different choirs. After a quick warm-up, we sat in the auditorium with all the other singers and then each group took their turn on the stage. The variety was striking. Each choir had their own distinctive performance style. There was also a very diverse range of music from international to British choral pieces, from classical music to pop mash-ups! We were last to perform, so after an anticipatory wait, it was finally our turn!

We opened our four-song set with Jolene by Dolly Parton. Rachel, our musical director, arranges all our songs. This is one of her most recent, and already seems a hit with the choir and, judging from the applause, the audience too! Next we sang one of my favourites, Send My Love by Adele. This is a challenging, but highly rewarding arrangement that moves the melody and inspired ‘dink- a-dink da’ backing between all four sections of the choir. Then, it was a Carole King classic, Natural Woman – a ‘natural’ choice for us perhaps given we are a choir of 60 females! Finally, we sang another one of our new arrangements, Like a Prayer by Madonna. It was great to have the audience (with a little encouragement from Rachel) join in with our gospel-style clapping during this last piece. As we left the stage, I looked and saw smiles all round on the faces of my fellow We Boppers.

The concert culminated with many of the choirs joining together on the stage to sing two mass songs. A rousing finish to a wonderful event. It was very engaging to watch such a range of choirs perform and I would recommend this festival to all groups of singers. Now I am looking forward to my future performances with We Bop, including a return to London Sangerstevne next year!

We are so excited to be performing again after 2 years. Do come along and celebrate with us at our summer charity concert on Saturday 9th July at St Luke’s

If you’d like to join us, please come along to our next FREE taster session on Wed 27th April 19:30 to 21:30. We are particularly looking for more alto singers

Just get in touch...

… and you can start singing.

You will be invited to a free taster session; there is no audition. We just ask for enthusiasm and a commitment to regular Wednesday evening rehearsals.

All music is learnt by ear (no reading required), and you will have access to online vocal guide tracks.

We look forward to meeting you. 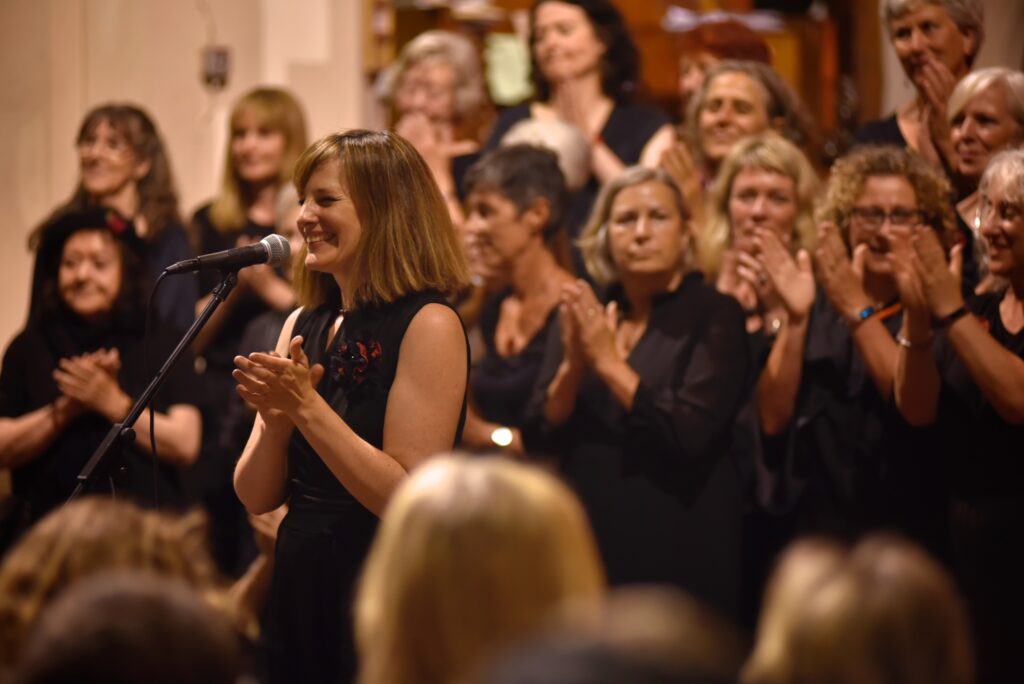 Join us to sing or book us for a gig.